Danielle Perkins was craving some papaya.

It was 2008 and Perkins, then a professional basketball player in Europe, was back home in Brooklyn, going through her usual off-season workout routine, while awaiting an official transfer from her club in Spain to her new one in Turkey. The former standout at St. John’s University, where she led the women’s program in rebounding in the 2005-2006 NCAA tournament, had carved out a successful post-collegiate career in the international circuit, with stints in Italy, Czechoslovakia, Puerto Rico, Austria, and other far-flung locales. She was looking forward to a new day with her Turkish team.

But that day, along with the numerous others she envisioned herself having on some Anatolian coast, would never come.

On her way to the grocery store to pick up papaya after a workout one afternoon in 2008, Perkins crossed the street in a bustling section of downtown Brooklyn. Before she knew it she was in an ICU with a cracked skull, strained neck, dislocated shoulder, and damaged nerves from the waist down.

To this day Perkins doesn’t recall seeing the car that rammed into her nor does she remember feeling any pain upon the impact. Of course, in the aftermath there was nothing but pain, excruciating pain. Perkins survived, yet her body was mangled, kaput. Her basketball career – her livelihood – was ruined. For the first three months of her so-called recovery, she was effectively paralyzed.

“That was one of the lowest parts of my life,” Perkins recalled in an interview with BoxingScene.com. “I wanted to die. If I can’t walk I don’t want to be here.” 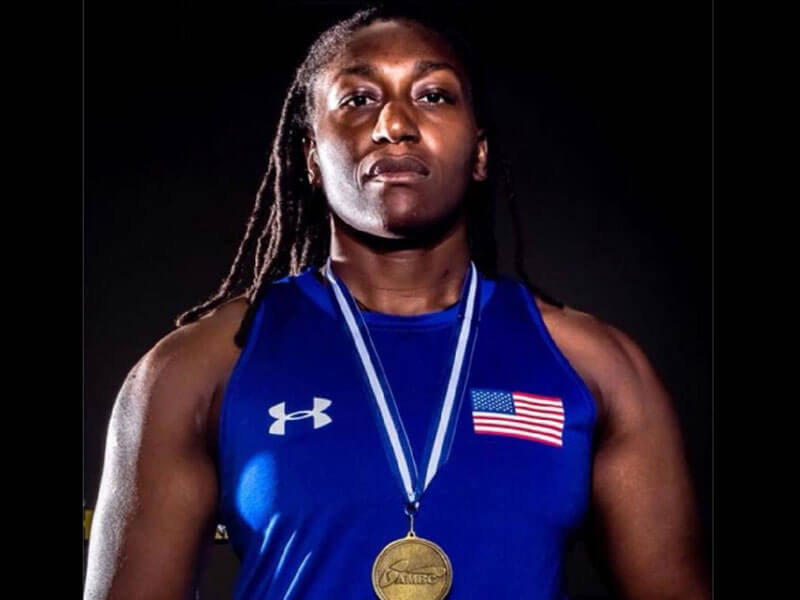 As harrowing as the physical damage was – all those headaches and rolling blackouts – Perkins was able to rehabilitate her body successfully within two years, an onerous and often dispiriting process that required, among other tasks, teaching herself how to walk again.

The psychic toll, however, was even greater.

“I couldn’t cross the street anymore,” Perkins said. “Getting hit really made me question the ability to do something simple. I couldn’t get past it.

“As an athlete you think you can do anything. You watch all these Jackie Chan movies and you think you can just jump over a car,” she added with a laugh. “But for the longest time, I couldn’t get over the (idea) of crossing the street.”

But Perkins, in time and with the help of much therapy, would find a way to overcome all that, and soon, she was back to crossing the street “like a normal person” without having flashbacks to IV drips and screeching tires. And while she may be nowhere closer to pulling off a Jackie Chan stunt move in real life, she’s also managed to do something since her accident that is more remarkable than any action sequence Hollywood could offer: she became a professional prizefighter.

On August 20, Perkins made her heavyweight professional debut under Marshall Kauffman’s King’s Promotions banner on a Dmitry Salita card at the Kronk Boxing Gym in Detroit, winning a four-round unanimous decision against Monika Harrison.

Not bad for someone who was staring down at a potential lifetime of permanent physical impairment.

What started as a simple way to stay in shape morphed into a far more serious affair than Perkins could have ever predicted.

In 2014, the 6-foot, 197-pound southpaw Perkins walked into Brooklyn’s Gleason’s Gym and found herself navigating the canvas as well as she did on the hardwood. Three years later, in 2017, she made her amateur debut. Her profile started to grow and soon she was notching medals at international tournaments, including gold at the 2019 World Championships, making her the first American man or woman to do so since Claressa Shields in 2016. Eventually, the pro ranks came knocking on her door. It was a no-brainer.

“Of course, my mom expressed how terrible of an idea it was,” she added, while noting that her mother is still her biggest supporter.

Perkins means serious business, though. In a sign of her commitment to boxing, Perkins recently linked up with longtime HBO executive Mark Taffet to help guide her nascent career. Taffet, who has since transitioned to the managerial side of the sport, would know a thing or two about handling fighters, particularly women, given that he manages three-division titleholder Shields, perhaps the most renowned active female fighter in the United States.

Admittedly, Perkins wasn’t exactly on Taffet’s radar until he saw her on the Salita card, on a livestream. He was instantly smitten.

“I watched her first fight on UFC Fight Pass, and I jumped off my seat and said ‘there’s the next heavyweight champion,’” Taffet recalled.

Immediately, Taffet got in touch with Perkins and worked out an advisory deal, in tandem with the rest of her team, which includes James Cooper, her trainer and manager, and Trent Williams, the NFL player who runs a boxing management company. Taffet, who also oversees the career of lightweight contender Shohjahon Ergashev, foresees big things for Perkins. At 38, Perkins is much older than the typical boxing neophyte, but what she lacks in youth, says Taffet, she makes up for in ability. It’s one more reason why Taffet is eager to put her on the fast track.

“My role is to do with her many of the things that I focused on with Claressa Shields,” Taffet said. “When you have world class talent you develop a two-year plan and establish goals and objectives with the boxer and the entire team and then use my expertise to achieve those goals one by one.”

As though pursuing a professional boxing career wasn’t enough, Perkins, who resides in Houston, is also a manager in the personal training department at Equinox, the high-end fitness chain, and helps open up new locations in key cities across the country. She is also chasing an MBA in finance.

Still, Perkins’ main goal is to become a boxing world champion…even if it means having to trade punches the day after final exams. So far she has her eyes set on nabbing the WBC heavyweight title from Mexico’s Alejandra Jimenez. Jimenez, you’ll recall, was recently suspended for testing positive for a banned substance after her super middleweight fight against Franchon Crews Dezurn back in January. Perkins though isn’t too bothered by the Mexican’s supposed dissolute behavior.

“It’s a boxing match,” she quipped. “Taking a banned substance doesn’t make you a better boxer.”

For some, that’s delusional thinking. For others, like Taffet, it’s precisely the kind of confidence that compels him to believe that Perkins could be the next biggest thing in women’s boxing – a tentpole figure around whom an entire division coalesces.

“I remember listening to (former HBO boxing boss) Seth Abraham always say ‘there’s boxing, and there’s heavyweight boxing,’” Taffet said. “In the history of the sport there is a special aura about the heavyweight division, and I think the same thing can happen here.

That seems like quite the burden to foist on someone who only a decade ago was struggling to walk – or, then again, considering what she’s overcome, maybe it’s no burden at all.

“I’m just grateful,” Perkins said. “Most of the time people have dreams and aspirations and they meet roadblocks and they stop. So I’ve had a couple of roadblock and I’ve just been able to be headstrong and keep moving forward. I’m just grateful for the opportunities continue to open up, especially now. Now is the perfect time.”