Alyica Baumgardner was sensational in stopping Christina del valle Pacheco in the 1st round of their scheduled eight-round junior lightweight bout that headlined a nine-bout card at the Zembo Shrine in Harrisburg, Pa.
The show was promoted by King’s Promotions.
Baumgardner sent Pacheco to the canvas in round one with a chopping right to the head.  Baumgardner finished off Pacheco by landing a flush combination that left Pacheco defenseless and the bout was stopped at 1:46. 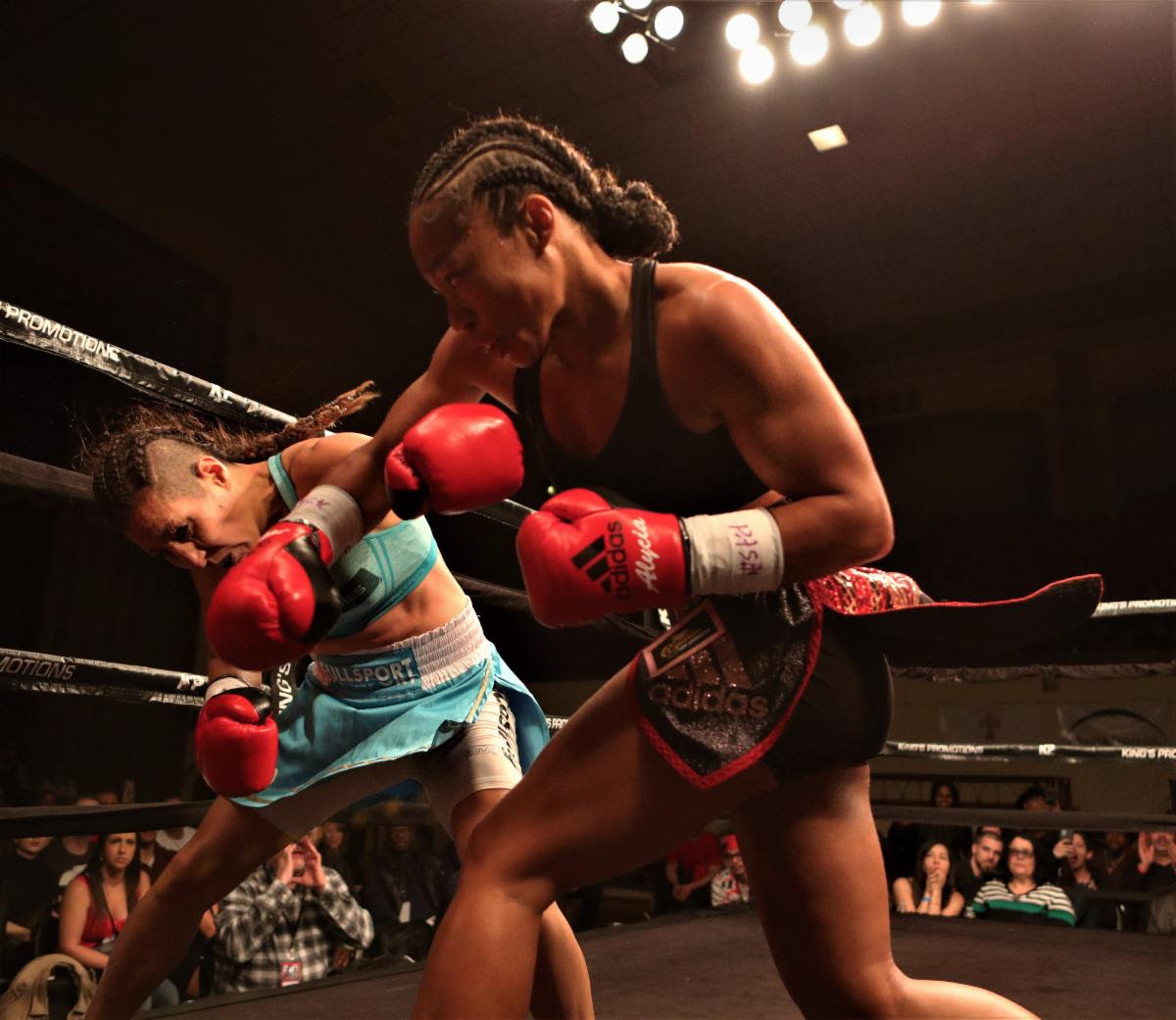 Baumgardener, 130 3/4 lbs of Freemont, OH is 9-1 with six knockouts.  Pacheco, 128 1/2 lbs of Cordoba, ARG is 11-13-2.
“Alycia looked fantastic tonight, and showed that she is one of the top fighters in the world.  She is ready and wanting to fight anybody in the world.” said Marshall Kauffman, CEO of King’s Promotions.
Carlos Vidal remained undefeated by stopping Jonathan Perez in the 2nd round of a scheduled six-round junior lightweight fight.
Vidal started landing hard shots in the 2nd frame.  He then landed a three-punch combination that wobbled Perez into the corner.  A follow up flurry sent Perez down and the fight was stopped at 1:48.
Vidal, 128 1/2 lbs of Las Vegas is 16-0 with 15 knockouts.  Perez, 128 3/4 lbs of Barranquilla, COL is 38-25.
James Bernadin stopped Nick Baez in the 2nd round of their scheduled four-round junior welterweight bout.
Bernadin landed several hard shots that backed up Baez before a huge overhand right to the jaw sent Baez down, and the fight was immedately called off at 1:57.
Bernadin, 141 lbs of Lancaster, PA is 3-0-1 with two knockouts.  Baez, 136 lbs of Bronx, NY was making his pro debut.
Dewayne Williams stopped Brent Oren in the 1st round of their scheduled four-round middleweight bout.
Williams landed a thudding combination that was capped by a left to the jaw that sent Oren down.  The fight was stopped upon Oren getting to his feet at 2:38
Williams, 160 1/2 lbs of Philadelphia is 2-2 with one knockout.  Oren, 156 1/2 lbs of Harrisburg is 2-3.
Michael Coffie won a technical decision over Grover Young after Young suffered a cut in
round five of their scheduled six-round heavyweight bout.
In round two, Coffie sent Young down with a straight left to the head.
In round five, Young was cut over his left eye.  Later in the round, the cut worsened to the point that the ringside physician determined that the cut was too much, and the fight was halted.
Coffie, 273 3/4 lbs of Kissimmee, FL won by scores of 49-45 twice and 48-46, and is now 8-0.  Young, 260 lbs of Memphis is 13-29-3.
Luis Morales remained undefeated with a four-round unanimous decision over Ayron Palmer in a lightweight battle.
Morales, 136 3/4 lbs of Harrisburg won by 40-36 tallies on all cards and is now 4-0.  Palmer, 138 3/4 lbs of Tallahassee, FL is 0-3,
Roudly Lolo and Mike Diorio brawled their way to a four-round split draw in a super middleweight bout.
In round four, Lolo suffered a cut around his left eye.
Each guy took a card 39-37 and a 3rd card was 38-38.
Lolo, 165 1/2 lbs of Harrisburg was making his pro debut.  Diorio, 167 3/4 lbs of Cortland, NY is 0-2-1.
Britain Hart and Unique Harris battled to a four-round split draw in a bantamweight fight.
Each fighter won a card 39-37 and 3rd card was even at 38-38.
Hart, 118 1/4 lbs of Bedford, VA is 3-3-3.  Harris, 118 1/4 lbs of Philadelphia is 1-3-1.
Khainell Wheeler remained undefeated with a 37 second destruction over Patrick Pierre in a scheduled four-round super middleweight bout.
Wheeler landed a left hook in the opening seconds in the bout that wobbled Pierre into the ropes.  The follow up flurry saw Wheeler landed several flush punches to the head, and referee Gary Rosato called a halt to the action.
Wheeler, 167 lbs of Bethlehem, PA is 4-0 with four knockouts.  Pierre, 167 3/4 lbs of Brooklyn is 3-10.
Photos by Darryl Bugham
For More information and credentials, Please contact: Marc Abrams at phillyboxing@gmail.com or 856 287 7611
admin2019-12-16T23:22:57+00:00December 16th, 2019|0 Comments