Alycia Baumgardner knows her time is coming soon.  Tomorrow night she will take the next step to contendership when she takes on 31-fight veteran Gabriella Mezei in a six-round bout The 2300 Arena in Philadelphia.
The Baumgardner – Mezei bout will be part of a four-fight stream on www.warfaresports.com beginning at 9 PM ET / 6 PM PT.
The show is promoted by King’s Promotions and Titans Promotions.
In the eight-round main event, undefeated super middleweight, Kalvin Henderson takes on Antowyan Aikens in a bout scheduled for eight-rounds.
Baumgardner (6-1, 4 KOs) of Fremont, Ohio is looked upon as a potential star in the super featherweight division, and she will look to look to improve her status in the noted fight town. 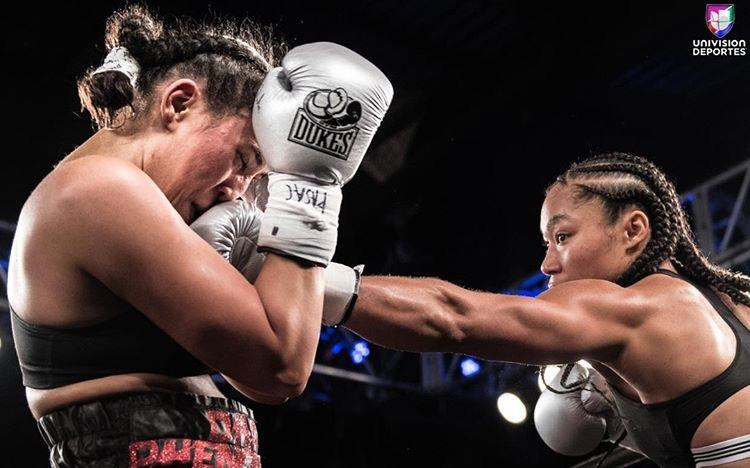 “I know that my opponent who is experienced fighter, and has been in there with some good fighters, and she is from Hungary,” said Baumgardner of Mezei.
Baumgardner was rolling along with with a perfect mark until her last bout when she dropped a disputed split decision to Christina Linardatou on March 24th.
“I have learned that a slight setback sets up a big comeback, and that is what I plan on doing starting on Friday night.  I am very focused for this fight.  That was a close fight that I thought I won, but I would rather have had that happen early in my career rather then later.  Now I can show what I can do for women’s boxing in the 130-pound division.  Women’s boxing is coming along and there are some great fights out there in the division against Mikaela Mayer and Tiara Brown.  If something like a fight against Amanda Serrano or Katie Taylor comes at 135, I would take that.  I am competitive athlete.”
This will be Baumgardner’s return to Philadelphia.  On February 10, 2018, she won a eight-round unanimous decision over Nydia Feliciano at the same venue where she will be displaying her talents on Friday night.
“I am happy to be back in Philly.  I won my (WBC International) title there, and the crowd was awesome.  I just want to give a big shoutout to promoter Marshall Kauffman and my manager Nelson Lopez for this importunity.”
In the first of two, eight-round co-features, super middleweight Brandon Robinson takes on DeVaun Lee.
Appearing in an eight-round lightweight bout will be undefeated super bantamweight Raeese Aleem (13-0, 7 KOs) taking on Ramiro Robles (15-8-2, 9 KOs) of Queretero, Mexico.
In Six-round Bouts:
Antonio DuBose (10-2-1, 2 KOs) of Philadelphia take on Weusi Johnson (3-11-1) of Wilmington, DE
Paul Kroll (2-0, 2 KOs) fights Vincent Floyd (4-6-1, 2 KOs) in a battle of Philadelphia based welterweights.
In four-round bouts:
LaQuan Evans (1-0) of Philadelphia takes on Hector Mercado (2-10) of Veracruz, MX in a middleweight bout.
Ryan Umberger (1-0, 1 KO) of Philadelphia battles Daryl Fenton (1-4-1) of Washington, DC in a middleweight bout.
Tickets are $100, $75 and $50 and can be purchased at www.2300arena.com
admin2019-05-10T17:20:52+00:00May 9th, 2019|0 Comments